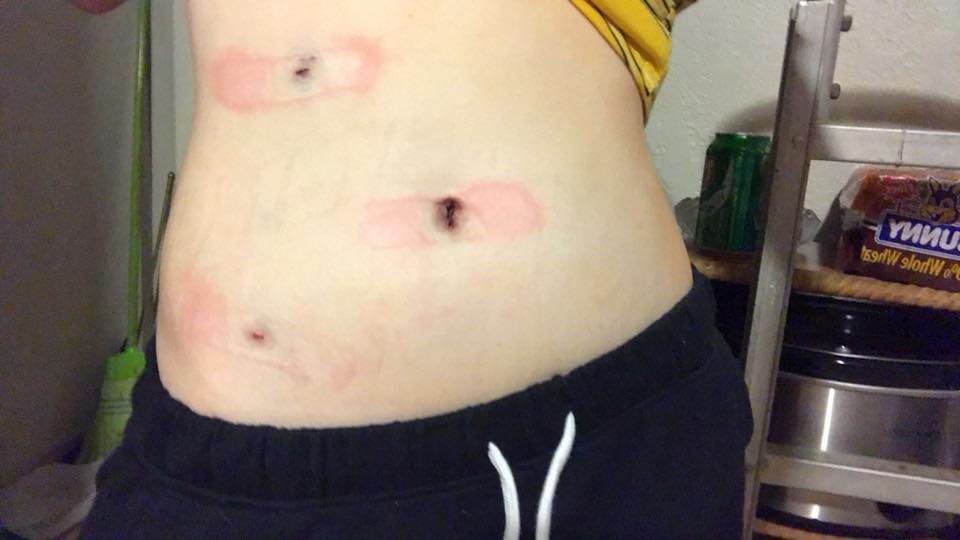 My earliest memory of pelvic pain was at eleven years old. I hadn’t had a period yet. I was walking in circles, crying. Before taking me to the ER, my mom says, “You better be crying like that when we get to the ER.” She thought I was just suffering from constipation. All of the tests at the ER came back normal and they sent me home. As I approached twelve and thirteen years old, my pain was more frequent and got worse. I had multiple trips to the ER for the pain and they would always say that it was anxiety related. I got my period at fourteen and things just got worse from there. I started seeing a physician about my problems but all she could figure was I had a nervous stomach. She never talked to me about the possibility of endometriosis. I had no idea what it even was. I was put on SEVERAL different medications ranging from pain meds, anti-depressants, birth control, and anti-anxiety. Some of the medications were: Nexium, Ibuprofen 600mg, Yaz, Elavil, Buspar, and many more. I was miserable throughout high school and kept returning to the doctor. I felt like a hypochondriac. When I started being sexually active, I noticed that I experienced pain sometimes. At eighteen, my symptoms were: pelvic pain, diarrhea, constipation, nausea, dizziness, fatigue, migraines, getting sick easily, severe bloating, pain with sex, and pain with bowel movements. I would get so tired that I couldn’t hold my eyes open despite getting sleep. I started to see an OBGYN. My pap smear came back normal. They gave me an ultrasound to check for cysts and I had one on my left ovary. I told my OBGYN that I thought there was something more going on.. At nineteen, he told me a little about endometriosis. We had tried me on a few birth controls at that time to assist with the pain to no avail. He said the only was to diagnose it, was through laparoscopy. I was willing to do anything to find out what was wrong. I had been suffering the past eight years. I took a leap without health insurance. I had my laparoscopic surgery on March 7th, 2017. Endometriosis WAS found. I was very happy that we found out what was going on, but also devastated when I looked into it and there was no cure. My doctor retired and handed my case over to the new OBGYN who was taking his place and thank God, I love him. I did a lot of research and exactly one year later on March 7th, 2018, I had excision surgery which is very different from ablation. Now, I just want to live my life like a normal girl. I want to have babies which may not be possible in the future. I stress about that quite often since I am single and twenty-one. When you tell potential dates about your endometriosis and desire to be a mother soon, they might not want the same thing, so its hard to find guys with common wants. I stopped going to nursing school due to the flare up pain and nausea making it hard to concentrate. Work is hard for me anyway because I miss so much and no one believes me. I’m keeping the hope alive that one day, this awful disease will be recognized in society as something debilitating. Thanks for reading the shortened version of my story. -Jackie