“It’s definitely not endo, and I would know!” 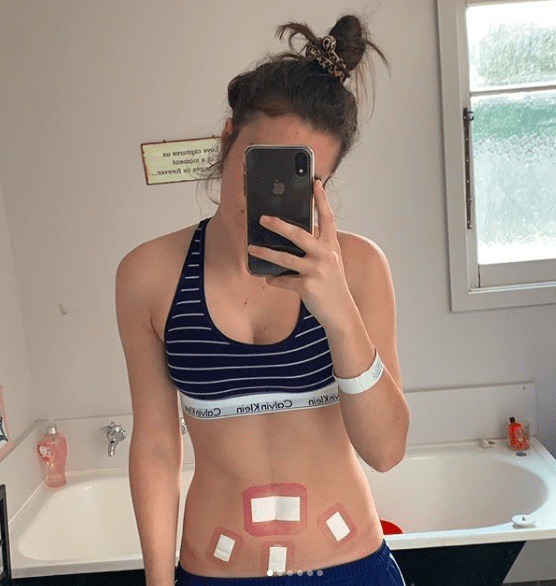 My story is probably a lot like others…. i’ve suffered for 7 years from Endometriosis. In March of this year I finally had surgery and was formally diagnosed with stage 3 and Adenomyosis.

But lets go back a bit. After years of horrible pain, I was constantly told that I had a poor pain tolerance and I was “dramatic”. The only ones who believed me were my parents – who were there and had to pick me up from high school every month after I had to sit in the “sick bay” for an hour curled into a ball in agony. I could feel the pain coming – and if I didn’t have painkillers to take I knew that within half an hour I wouldn’t be able to walk. Yet so many didn’t believe me – not teachers, not friends, not other family, not even doctors.

My first meeting with a specialist was at 16, I was told this same thing again about pain tolerance, and that if it was really that bad when i was still in my 20’s I should come back. So, at 21, after being sick and tired of the pain every month, a week before meeting with my amazing surgeon (you really need the right one!) I was told by yet another doctor (a GP whom I had not met before) that she had worked around Endo for years, and said my symptoms were not consistent, and she thought it “definitely wasn’t endo”.

I had to tell her I wanted to see a specialist very sternly before she did, reluctantly. As I sat in the waiting room for my appointment, I got a brochure for Endo by Endometriosis New Zealand that I hadn’t seen before and read the checklist of symptoms. I checked off very. single. one! I couldn’t believe that a week before I was told I had the wrong symptoms, because, at its worst, I struggled to concentrate – the pain is like a balloon expanding, popping, and then filling back up again. I would have hours of intense pain. My mother even said my cries sounded like labour pains. At its best, the pain is significantly worse than anything “normal” yet I have to work, socialise, and live through it. I have also struggled with anxiety for years, which doesn’t help matters all. I also really struggled with the mental toll at 21 to have such volatile fertility – something I always wanted later in life but felt the extreme pressure of having to do it sooner.

Coming out of surgery, I had a horrible experience with the medication – I felt trapped in my own body. My stomach was swollen and hard and I had a few nights up crying from the pain in the 2 weeks after. I struggled walking and lifting my arms. You really need the full 2 weeks bedrest to recover. After that, I spent days in the gym crying because my body just wouldn’t do what it should. I could barely do anything I could do just weeks before and it took me months to rebuild that strength. But I would do it all again for the minimised pain – nothing compares to that original period pain. For me, pain management with the surgery and the pill has been great. I had an amazing surgeon who was kind and caring and explained everything to me so well. He was involved every step of the way. But I know its different for everyone. You have to find what works for you. I truly feel like one of the lucky ones. Support is also so, so important. I had my beautiful mother there to bathe me, feed me, even brush my hair for me after surgery. My whole family and partner constantly support me by filling up hot water bottles (yes, they are the best!!) and asking how they can help.

Since diagnosis I have also been following many social pages and groups, and went to an Endometriosis NZ event – with some amazing speakers that actually truly understood what I was going through and gave me so much hope for my future. If I go back, there were times where I begged my parents to get a heavy pan and knock me out because I couldn’t take the pain anymore. I know it’s kind of graphic but it’s reality. Now, I don’t dread my period so much. Most of the time, I am able to work and socialise and (sometimes) exercise. Yet, I am still dependent most months on pain relief and the pill, and I still think nearly every day about what this will do to my life.

When I think of my 16 year old self not being listened to, I wonder if I could have avoided how much worse it got. I wonder if I had seen that brochure 3, 4, 5, years ago I would’ve taken it further, sooner. That’s why I want to share my story as personal as it is – we need to be believed. We need to be louder. We need to be taken seriously.